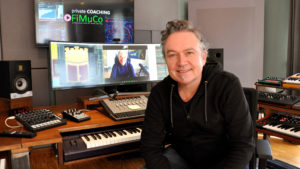 Since April 2021 i`m offering my PRIVATE FILMMUSIC & MUSIC COACHINGS in addition to the film music weekend workshops. The individual coaching with various thematic modules enables a professional study of film music. Up to 25 different topic complexes and many new modules are offered, from the basic training becoming to a professional film music composer. The coaching takes place using the Zoom software, you need basic knowledge, which I would to support you. With several cameras you get different video views from the recording studio and an excellent speaker transmission. The sound for music is transmitted to you in hi-fi stereo. My complete logic session with all 1,000 tracks, mixer, plug-ins and film will also be transmitted on your home screen.

Registration with a personal coaching at info@marcelbarsotti.com
Coachings by arrangement from Monday to Fri, starting at 10:00 a.m. or 3:00 p.m.
EUR 80 per 60 minutes, plus VAT

NEW! MUSIC MASTERING & STUDIO ACOUSTIC
How do I create a professional music mastering? Coaching 3 hours each, can be extended as required

In this module you will learn with your own music examples, how to implement professional music mastering. From frequency analysis, the right equalizers, analyzing, phases, from compression to limiting, from overtones, stereo or mono width, from mastering plugins to the right loudspeaker boxes and their positions. This module also contains instructions for professional recording studio acoustics. Which absorbers do I need: from bass absorbers to ceiling panels, which materials do I need in the recording studio, what resonates, which floor constellations do you need? Your recording studio will also be analyzed and if necessary optimized.

NEU! SYNTHESIZERS & PROGRAMMING
Coaching 3 hours each, can be extended as required

In this module we work with a large selection of professional hardware synthesizers and many well-known software synthesizers. Which synthesizers are trending, what is the difference between hardware & software, digital or analogue sound generation, which synthesizers do I use for which music genres? We go into the topics of oscillators, filters, ADSR, LFO as well as FX and modulations, listen to your electronic titles and analyze how we can improve their sound.

NEW! PROFESSIONAL ORCHESTRA MOCKUPS
How to create professional orchestra mockups. Coaching 3 hours each, can be extended as required

In this new module we work with current orchestral libraries, from Aaron Venture Infinite to Spitfire, with real impulse responses like the Mozarteum or Air Studios (Harry Potter), with impulse and reverb simulations from Cinematic Rooms to MIRPro, with Solo Orchestra Instruments from VSL and many other manufacturers. Due to the immense amounts of data from orchestra sessions, we learn how to work with Vienna Ensemble Pro7 in connection with the Logic Pro sequencer (also possible with Cubase!). This enables sessions with up to 200 GB of RAM and over 1,000 tracks on a host session. With the know how of professional logic setups, the exact programming of controllers, repetition tools and room simulations, various logic examples and your music setup, i will show you how authentic orchestra mockups can be created.

NEW! pillar4+ THE FUTURE OF FILM- & MEDIA MUSIC
With which financial pillars does the modern media composer earn today? Coaching 3 hours each, can be extended as required

NEW! SOUND LIBRARIES AND PLUG-INS SUPERVISING
Coaching 3 hours each, can be extended as required

Based on a Logic Pro session with over 1,000 tracks, I will advise you on which current software and sound libraries you are currently working in film music, how you can program and use the libraries sensibly. The following themes are available: Orchestra Libraries. Hollywood Drums & Percussion. Solo instruments & steel strings. Piano Libraries. Ethnic Instruments. Choirs. Software Synthesizes. Fx Plug-ins & Pads Libraries. Mastering, Equalizer and Mixing plug-ins. Logic Pro Host. VEP7 host.

In 14 steps, it is explained in detail how to professionally acquire customers, receive orders and expand your customer network. In this module, personal websites and social media accounts are analyzed and improved, perfect emails, role plays, domestic and foreign acquisitions and the route to the USA, working with editors, directors and producers, studio owner, soloist, coach or sound developer and much more. Through a weekly and targeted acquisition, it is possible to multiply your monthly fee.
The 14 Steps: spadework analysis. talents. your home page. modern show reels. social media Internet. competitions and pitches. management & agencies. foreign acquisition. hollywood. cold acquisition. business talk & band contracts. presence & online. film production companies & streaming services. on Air: from festivals to premieres. your daily to-do list.

Frequently booked! DRAMALYSE METHOD
Coaching 3 hours each, can be extended as required

With the help of various graphics, analysis methods, audio samples and interactive composing on the computer, your film scenes with sound are analyzed dramaturgically, improved with exercises and thus perfected for the customer. Here we discuss which instrumentations and compositional styles are best for achieving a perfect result, how errors in dramaturgical composition can be avoided and how to become more and more professional from film scene to film scene. Film scenes to be set to music are delivered by me in advance

NEW! RECORDING IDEOLOGY IN 9 STEPS
Coaching 3 hours each, can be extended as required

This is about practices in recordings with orchestras and solo instruments: from the first microphone setup to the right master plug-in. How do I hear correctly? What tools, monitors and hardware/software do I need? How do I build the right acoustics? What is right, what is wrong?

NEW! Frequently booked! MODERN COMPOSING
Coaching 3 hours each, can be extended as required

How does modern film music or music in general sound today? Which musical genres are wanted and played on TV stations, in cinema films and streaming services? This module is about composing modern film music, new harmony structures, synthesizer programming, creating spaces, working with spherical sounds and FX sounds instead of classic film composing. In this module we will go through your film scenes, analyze them and perfect them for the customers. Work is also done interactively on the computer.

70% of composer income comes from worldwide royalties. Participants book this module again and again and find out how much money they have already lost due to missing or incorrect controlling at Gema, GVL or Label Income. How funds can be collected retrospectively will be discussed. But it is much more important how you can increase your future income through correct controlling with GEMA and GVL. The essential basic rules of Gema and GVL are explained here, including rating, pension, label income, digital and manual controlling, streaming, factory registrations, sound files, complaints, TV tables, foreign royalties or AV lists. In addition, it is explained in which musical genres you get paid particularly well royalties.