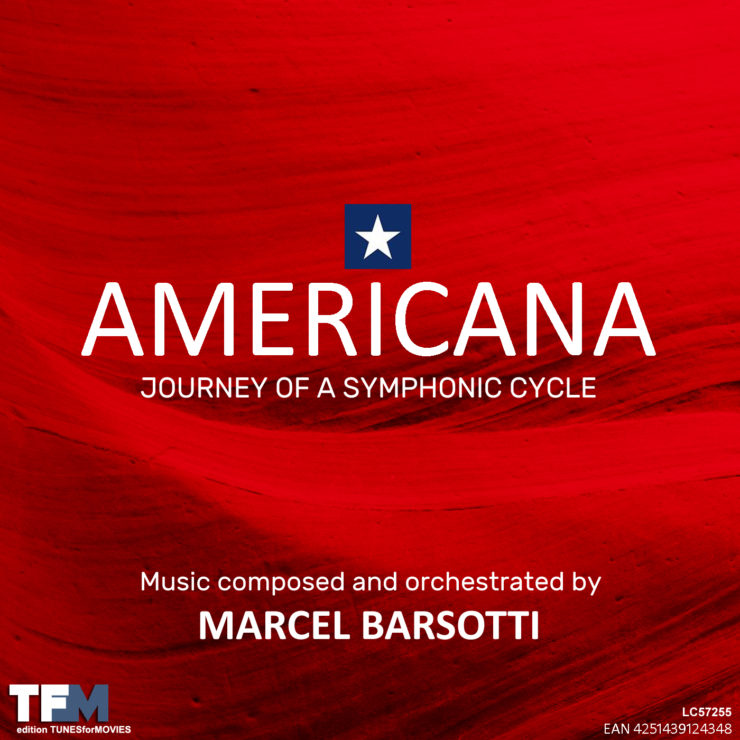 Here you can buy the album

AMERICANA is a large, orchestral and symphonic cycle for orchestra and choir by the Swiss film composer Marcel Barsotti. AMERICANA, consisting of 12 works, is a blockbuster journey through American history, starting with the beginnings of the Spanish and English conquerors up to the colonization of the American West. AMERICANA awakens the sounds of the wild west and the cowboys, the suffering of the American Civil War, the great fast-paced Hollywood music and the American, elegiac blues of the African-American population. AMERICANA tells musically, with speed, grandeur and pride, the beauty of the North American continent – the mighty valleys, prairies, forests, mountains, and the American dream for infinite freedom.

Hollywood Symphony from the album “Americana” by the film composer Marcel Barsotti, recalls the optimism and pathos of American Hollywood film scores, the musical splendor of successful Hollywood that continues to this day. The composition, beginning with broad brass chords, is introduced by a fast string passage with a deep viola and cello theme. High strings then take over the pathetic and powerful composition, broken up by large horn counterpoints and trumpet interjections. In the second part of the composition, the music becomes much more rhythmic and elegant and develops into a whipping composition, with lots of timpani and percussive orchestration. The composition becomes denser, louder and more dissonant towards the end and ends in a furious, fast tutti chord.

The conquest of America by Christopher Columbus, the Spaniards and the English, the European armies followed with large fleets of gigantic sailing ships, the invasion of the unknown land of the European kings. All of this has a musical effect on the composition of “Kings of Glory”, led by marching, deep drum rhythms, a dotted string rhythm and a spirited solo cello. The cello theme continues in a horn ensemble, accompanied by deep male choirs. A rising, epic theme now takes the lead in the violins and spreads more and more into a pathetic anthem of conquest. At the end the composition finds calm again in the solo of the cello.

“Deep Wild West” from the album “Americana” by the Swiss film composer Marcel Barsotti is a symphonic, classical homage to the American Western music. The fast-paced composition begins with a rhythmic string sequence, led by the main melody of a solo trumpet, which is then replaced by a horn ensemble. In the middle part of “Deep Wild West” an epic legato theme can be heard in the strings that reminds a little of the great prairies and their herds of buffalo in the American landscapes. At the end the composition becomes faster again and ends in a brilliant tutti finale.